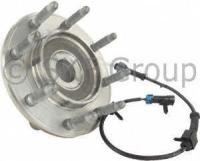 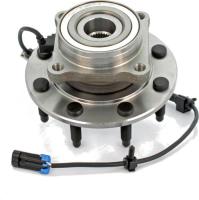 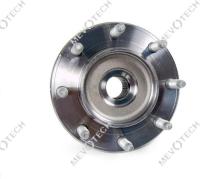 The hubs of the driven wheels differ from the ones that are not, even though they look similar. They are constructed differently because the drive hubs incorporate the driveshafts. With a front-wheel-drive car, the hub has to perform two functions, one is to drive the wheels, and the second is to swivel so that the car can be steered. In order for this to be possible, the hub rotates in a huge casing which is known as the hub carrier. This carrier itself is mounted to the suspension by ball joint, which allow it to swivel, and move up and down. The cars with MacPherson struts have a different setup. In these cars, the hub carrier has a ball joint present at the bottom, which is bolted or is a part of the strut at the top. The upper swivel is formed by the struts top mount where it joins the inner wing. The amount of hub carrier swivel is controlled by the steering gear, which has the steering arm attached to it by another joint.

Where does Hub Assembly fit?

The hub assembly is susceptible to wear and should be replaced if damaged. PartsAvatar offers a complete collection of hub assembly and related parts like front hub assembly and rear hub assembly needed for the restoration of your vehicle. Our extensive collection of parts ensures that you get everything you need in one place only. We get parts only from the top manufacturers and ensure of best quality standards and operations. We also offer the best prices in the market and deliver the products at your doorsteps from warehouses stationed across Canada.

How can you find your GMC Sierra 2500HD Hub Assembly

Finding the right car part for your vehicle can be annoying, but not at PartsAvatar. Our website is user friendly, and this helps you to navigate easily and find the perfect fitment hub assembly. Select your vehicle's make, model, and year in the drop-down option available on the website, and then select the category you want to explore. Here you will have to click on the ‘replacement’ tab under which you will find ‘hub assembly'. Once you land on the page, you can browse through the categories and use the various filter options as well.

PartsAvatar sources all the auto parts from the top manufacturers and brands in the market. This ensures that you will always get the best fit and function from any part you purchase from us. All parts are manufactured from top quality materials and are built to last longer than cheap copies of parts from counterfeit brands. All parts are available from top famous brands like Beck/Arnley, SKF, Worldparts, etc. These parts come with proper warranties from the manufacturers and are available at the lowest price, only at PartsAvatar.