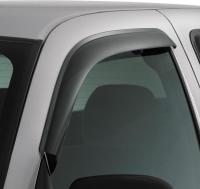 What is Wind & Rain Deflectors

Rain Guards, also regarded as wind deflectors, window deflectors or window visors, are among the most undervalued automotive exterior components; You underestimate how effective they are until experience what they can achieve, that saying, when you’ve got them on your car or truck, you wonder how they interact with you. Rain guards assist in maintaining your car’s aerodynamic performance when the windows are pulled down, reducing loud and disruptive wind sound. Using rain guards when you’re driving in the rain with the windows open a crack for air ventilation will not allow your car’s interior to get all wet. Even on hot summer days you can leave the windows open a crack when your parking without warning signals to thieves that could break in. Outside of choosing tinted or chrome finishes, the biggest errand you face is deciding on what wind deflectors are applicable how they’re to install. Wind deflectors can be attached in the window channel or they can also be taped to the body of the car. It is preferable to how you demand what the image of your wind deflector will look like on your car or truck, but also how much are you willing to devote your effort into installing the piece.

PartsAvatar has in stock all high quality wind deflectors you will easily find at our online and onsite auto shops all over Canada: Weathertech in-channel side window deflectors, avs factory color match in-channel low profile ventvisor, avs tape-on aerovisor window deflectors, avs in-channel aerovisor smoke front window deflectors, avs combo kit tape-on matte black low profile vent visor and avs tape-on sunflector sun deflector. There are two different kinds of wind deflectors, the in-channel window deflectors and stick-n window visors. Top thing to learn of in-channel window deflectors is that some are available with tape. This particular tape is not exactly like the cellophane on a roll material that you put on your desk drawer. This items is 3M™automotive-grade double-sided foam tape. Truly it has super strength and is very efficient for the automobile manufacturers that attach chrome trim parts at the factory use it. The foam core lets the tape extend and decline with how the temperature changes and accepts surface abnormalities. Installing the wind deflector is very easy and there aren’t unattractive fasteners to put up with. The tape is provided with defensive backing that you can peel away before making a final installment. In-channel window deflectors have protective flat rims that fit into the door’s upper window channel. Starting at the front, the window gets lowered and the flat rims get tucked up into the channel. Depending on some deflectors, they need much tension to stay absolutely installed, as they technically “snap” right in place. As demonstrated before, other in-channel deflectors use tape to keep in their placement.

It is always best to fit the flat rims in advance as soon as the tape is placed on, as they are hard to remove. Once you’re happy about the installed placement, take off the tape backing and tuck the flat rims up into the channel. After installing, bring up the windows to leave tension on the window deflectors. The manufacturer might state that the windows stay in this placement for durations of time to finish the installation. Stick-on window visors are applied with tape to the doorframe that is just above the window channel. When installing this type of visor, it requires an “eye for detail” in contrast to in-channel visors. Prior to final installation, you’ll be required to position the window visor and be sure the spacing between it, the top part of the door and the body line is even, and all around the top. If installing window visors on the front and rear, be sure the visors also at the top. To make test fitting simple, peel a small piece of the backing right off of the tape at the leading, including trailing edges of the window visor, which leaves the end of the front tape backing sticking out as the visor is put against the door. Small pieces of visible tape will keep the window visor bound against the door, thus allowing you to resituate them, as this is mandatory while you are test fitting the visor. Prior to the final installation, the door should be cleaned where the tape will be placed in accordance with the surface preparation given with the window visor. This will replace wax and other matter that could prevent the tape from sticking fast to the car’s body surface. When satisfied with the window visor’s placement, take off the tape backing by pulling on the end of that backing you’ve kept visible, starting at the front of the visor, while putting tautness to the visor. After taking off the backing, use your fingers to put tautness to the window visor from front to back on the surface that’s opposite to the tape, thus it makes sure the tape sticks properly to the door. The manufacturer might identify that the car should not be washed or unprotected to water for a long duration of time after installing the wind deflector.