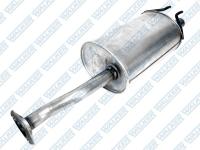 An exhaust muffler (silencer) is a device that helps reduce the noise emitted by internal combustion engine exhaust. A muffler or silencer has the function of cooling exhaust gases by expansion and minimising the noise of the outgoing gases. With minimum constraint, the exhaust gas must be released into the atmosphere. The restriction in exhaust gas flow may cause backpressure.

The muffler is an acoustic soundproofing device which helps to reduce the sound of the engine through acoustic quieting. It contains a set of chambers or pipes with some holes in them. A resonator is fixed to the first chamber with a hole, and it has a certain amount of air with a specific length which has the capability to produce a wave that cancels out a certain frequency of sound. When the exhaust valve will open creating pulses, and there will be a sudden burst of high-pressure gas which enters into the exhaust system. The high-pressure gas molecules will start striking against the low-pressure molecules inside the pipe, which forces them to stack up on each other. As this takes place, they start piling up on the molecules a little away down the pipe. As a result, field of low pressure will be originated behind them, and the sound wave will move down the pipe acquiring more speed than the actual gases. When the exhaust gases and the sound waves enter the center pipe, they start bouncing and move through the hole into the main body of the muffler. Once they reach, they will again go through another set of holes in the next chamber to turn and finally leave the muffler from the last pipe. Exhaust System An exhaust system uses a set of pipes to keep the exhaust gases away from a controlled combustion which is available inside the motor engine. The burnt gas inside the engine is known as the “exhaust.” There are two operating components. The first one relates to the expulsion of exhaust gases from the cylinder. It takes place when a pulse of hot gas goes outside the cylinder and moves to the header primary tube. The second one is the movement of the pressure wave obtaining variations in the port during the opening of exhaust valve. By influencing these pressure waves occurring in the second component, the cylinder that is present in the first component can be made clear so as to allow the flow of fresh charge into it. In a four-stroke piston engine, when the exhaust valve opens, the pressure in the cylinder will be above the atmospheric pressure, and the pressure at the valve in the exhaust port will be almost one bar (atmospheric). The variation in pressure across the continuously changing valve aperture will allow the exhaust gas to flow through the opening, and it will cause the pressure behind the valve in the port to raise quickly. Since the velocity of the flow of exhaust gas at any point is proportional to the pressure gradient and the cross-sectional area at that point, evan a minor variation in the header can multiply the velocity at a given RPM. If the diameter’s header is very small, it will cause a loss of gas flow, thereby increasing the pressure gradient. This situation will lead to offsetting the tuning gains. Therefore, selecting the tubing diameters is very appropriate in designing the exhaust system. The exhaust pipe carries away toxic as well as other gases, such as hydrocarbons, carbon dioxide, and nitrogen oxides, away from the vehicle user.

Muffler for Popular Models
Still can't find what you need? Contact us.