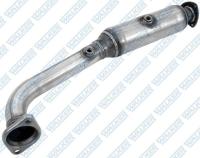 A catalytic converter is a device that uses a catalyst to convert the harmful and poisonous gases coming out from the exhaust system via a chemical process. Catalytic converter is made of platinum and palladium with a honeycomb structure that is encased in a metal shell and is attached to the exhaust pipe. The main purpose of catalytic converter is to convert the carbon monoxide into carbon dioxide and water, It also converts nitrogen oxide (NOx) back into nitrogen and oxygen. The reduction catalyst is the primary stage, where platinum and rhodium help to reduce NOx emissions. The second stage is called the oxidation catalyst, in this stage it reduces unburned hydrocarbons and carbon monoxide by burning them over a platinum and palladium catalyst, and final stage is the conversion is a control system that can monitor the performance of the exhaust system.

Where is Catalytic Converter Located?

Catalytic converters are located in the exhaust system, after the exhaust manifold and before the silencer or muffler.

Articles and Guides that are written with the help of mechanics to ensure you have all the knowledge you need to make the correct purchase here at PartsAvatar.

Confused Which Is The Right Cat Con For Your Vehicle? Let Us Help Choose Just The Right One For You.

All About Cat Converters

Read Through To Learn About The Importance, Working, Features And All About Cat Converters.
Still can't find what you need? Contact us.