A door is controlled by the door handle by manipulation of a latch which is a mechanical fastener that helps to join two or more objects together. In a door, a latch connects it with its frame and tends to embody a sliding bolt that is fixed in the door and a receptacle is fixed in its frame. The position of the latch is identified by the handle that can take many forms which includes the knob and lever. It is then fixed to the latch through a spindle and cylinder. As the handle is pulled or rotated, the action will be carried by the spindle into the cylinder, which will turn in the clockwise or anticlockwise direction based on its orientation. The movement of the cylinder will cause the fixed bolt to be forced across the internal face of the door by sliding inside or outside of the frame’s latch receptacle. This will make the door to either close or open.

The door handles are used in some cars as an extension on the car's outer side, whereas in other cars they are incorporated into the vehicles ' fascia so it forms part of the body. Door handles are typically made from steel, whereas the chrome door handles can be seen in very expensive cars. There is an electronic entry pad in luxury vehicles like the Lincoln Town Center where you have to insert a numerical code or you have to scan your thumb to open the door. 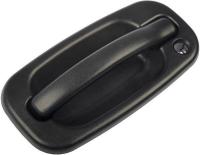 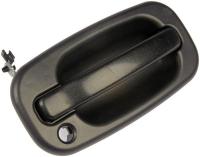