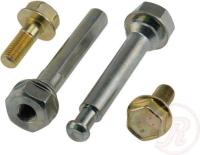 About front caliper bolt or pin

What is the purpose of front caliper bolt or pin?

The main function of the disc brake caliper bolt is to secure the caliper brake hose in place.

When you would apply brake, the fluid would be pushed into the caliper, which would force a piston into a brake pad, and the pad into the spinning disc, called as a rotor. That is when the magic would happen. As the rotor would block the movement of the piston, the caliper would itself slide back towards the car along two little rails called guide pins.

Front Caliper Bolt Or Pin for Popular Models
Still can't find what you need? Contact us.