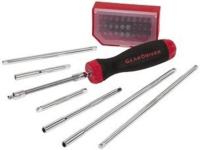 A basic screwdriver has a handle and a shaft, resulting in the user's tip that would bring in the head of the screw before turning the handle. The shaft will generally consist of durable steel so it can withstand bending or twisting. The tip could be hardened to withstand wear, which would be treated for better visual contrast between tip and screw with an ark tip coating — or ridged or treated for extra ' grip. ' The handles may generally consist of wood, metal, or plastic and are typically cross-sectionally hexagonal, square, or oval to improve grip and prevent the tool from rolling when mounted. In some manual screwdrivers there are interchangeable tips that would fit into a socket at the end of the shaft and be placed in either mechanically or magnetically. These often have a hollow handle with lots of styles as well as tip sizes, and a reversible ratchet action that will make lots of complete turns without repositioning the tip or hand of the user.

The screwdriver is used to screw (instal) and loosen (remove) screws.