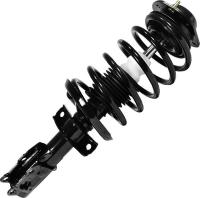 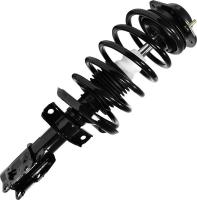 Full strut assembly is essentially a combination of two main parts, i.e, spring and shock absorber. Both of these parts play a crucial role in smooth vehicle drive experience, the spring supports the weight of the vehicle and absorbs massive bumps, whereas the shock absorber dampens noise, supporting some or all of the vehicle's weight, too. Because of its weight-bearing nature the strut must be much stronger than a standard shock absorber.

Struts play a very important role in a vehicle, they perform two main jobs. Firstly, the struts perform a shock damping function which helps vehicles move smoothly over bumps on roads, hence internally the strut is much similar to a shock absorber. The strut velocity is sensitive just like shock absorbers, which means that is a valved in such a manner that the amount of resistance can increase or decrease as per the speed of the suspension. The second job struts perform is not similar to shock absorbers; rather it is to provide structural support the vehicle’s suspension. Because of these two very crucial functions, the complete strut assembly affects the riding comfort and handling, they also impact vehicle control, braking, steering, wheel alignment and wear on the components of the suspension including tires.